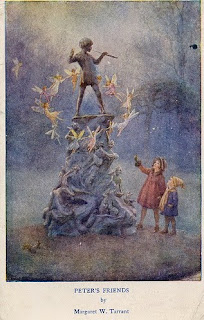 As a storyteller, I loved the framing of the Stratford production around the on-stage presence of J.M Barrie as narrator. And I had nearly forgotten as an adult that it was storytelling that enticed Peter to the Darling household, and that it was Wendy's professed talents as a storyteller that ultimately took her to Neverland. All in all, a great production, for all those who believe in fairies, or those who never really wanted to grow up.
Posted by Dale Jarvis at 16:05

Hey Dale! This is John David Hickey from Montreal. We've met a couple of times at various fests across Canada.

Would you be interesting in a link exchange? I've been keeping a blogcast since November 2008, so I invite you to check it out and let me know what you think: