A Steamed Christmas Pudding - My Christmas tradition, in Three Acts 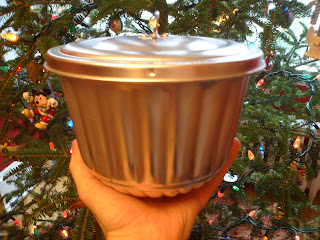 "Oh! All that steam! The pudding had just been taken out of the cauldron. Oh! That smell! The same as the one which prevailed on washing day! It is that of the cloth which wraps the pudding. Now, one would imagine oneself in a restaurant and in a confectioner's at the same time, with a laundry next door. Thirty seconds later, Mrs. Cratchit entered, her face crimson, but smiling proudly, with the pudding resembling a cannon ball, all speckled, very firm, sprinkled with brandy in flames, and decorated with a sprig of holly stuck in the centre. Oh! The marvelous pudding!"   - Charles Dickens, 'A Christmas Carol'

This Christmas, I bought myself an early present: a new Christmas Pudding mould. Every year for the past decade or so, I've been making a traditional English Christmas Pudding, in the same mould every year. Last year, for the first time, I made the pudding out in Clarke's Beach, and this year, when I went pulling supplies together for the pudding making, I found that I'd left the mould out around the Bay. So off to Living Rooms I went on Christmas Eve Day, and got myself a new mould (above).

A steamed pudding was not something I grew up with at Christmas time, but I love it, and have made the annual making of the pudding my contribution to Christmas dinner. It is thick, sweet, heavy, and probably terrible for you, but that is what the best traditions are all about anyway.


My pudding recipe varies slightly from year to year, depending on what I have in the kitchen, and on my mood. The rough recipe is as follow:

Act One - The Fruit of Spain


Flour of England, fruit of Spain,
Met together in a shower of rain;
Put in a bag tied round with a string;
If you'll tell me this riddle, I'll give you a ring.

The answer, of course, is a pudding, which was often steamed in a bag.

Mix it all together in a large bowl, stirring well to cover the fruit with the flour. The exact mix of fruit can vary. This year, for example, I didn't have currants or coconut, or almonds for that matter. So I used more cherries, some ground walnuts, and a handful of trail mix. As long as you have about 4 1/2 cups of fruit and a 1/2 cup of flour you are fine. It should look something like this when it is done: 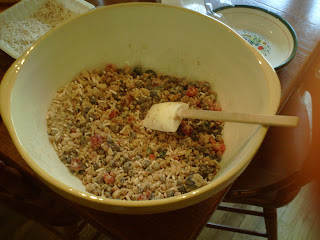 The mixing bowl I'm using is one I borrowed from "Aunty" Paula MacDonald. Last year, I interviewed Aunty Paula as part of the Here[Say] narrative cartography project for Water Street. She told about her memories of S.O. Steele's, which was THE place to buy china years ago. You can listen to her story here.   Remembering her tale of the bowl, I asked to borrow it for the mixing this year and it worked wonderfully!

The key ingredient for a good pudding is suet. Suet is fat. That's it, plain and simple, just fat, usually beef, but sometimes mutton. I suspect there is some kind of vegetarian alternative for suet, but I can't imagine using anything else in a Christmas pudding. I've used coarse chopped and fine grated suet in my puddings, and I have to say I like the coarse ground suet better. I like the final texture it gives the pudding, more airy and with more nooks and crannies to soak up custard.

Mix it all together with the fruit. I sort of play this stage by ear as well, and I'm generous with the suet and the spices. A little bit extra suet doesn't matter, and I like a strong tasting pudding. Sometimes I'll use a bit more flour in the first stage, to cover the fruit, and then a bit less in the second half.

Grease your pudding mould. I've got two this year, my new one, and a smaller ramekin with a little individual pudding for Aunty Paula.  Here are the puddings, in their basins, ready to be covered and steamed: 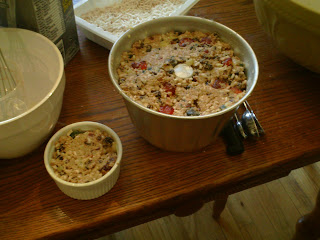 If your pudding pan or mould doesn't have a snap on lid like mine does, you can use a cloth or double thickness greased foil, and tie it down with string. Put it in a pot with boiling water 2/3 up the way of the pudding and boil for 3 hours, adding water as needed.

For the past couple years, I've used a Westinghouse two-tier vegetable steamer, which has a removable middle tray to accommodate the height of my pudding mould. It is a lot easier than watching a boiling pot. It has a 60 minute timer, so I just top it up with water and let it steam for an hour and then repeat for 3 hours.

As I write, my Christmas pudding is steaming merrily away. It will be served tomorrow as the grande finale of Christmas dinner. I've got half a flask of St. Remy Napoleon Brandy saved for the flaming, which looks great. Heat the brandy in a pan still it starts to steam a little, pop the pudding out of its mould, onto a plate with a bit of a lip. Pour the hot brandy over it, light it on fire, turn off the lights and carry it to the table amidst oohs and ahhhs.  A fine bit of drama to end your dinner!  I always serve it with custard, but you can serve it however you like.

Yum- I love it too. My aunt Helen always makes it so the rest of our clan is lazy and as a result I don't know how. I had one with all 'real' fruit and nuts and none candied and it was DIVINE (prunes, apricots, figs) and plenty of nuts of my liking. Will make an effort to make one of my own...next year.

The Christmas pudding was always a part of my family's tradition. After my grandmother passed away my father took over the family recipe. The recipe was all in weight (1 lb suet, 1 1/2 raisins, etc...) and made four bowls worth. Last Christmas my father gave me a photocopied version of his photocopied version. Little did we both realize (who knows, maybe he did realize) that he would pass away a few months later.
With the business of getting a family of four who overdo the whole Christmas thing ready for the holidays I didn't really give much thought to the fact that this would be the first Christmas without my dad until Lia (my wife) requested plum pudding for Christmas dessert. I thought that wasn't possible because dad hadn't made any. Lia suggested I make some, I did have the recipe after all.
So that is what I am doing right now. It was hard. Not the recipe, the recipe is easy, well, except for tying the bowls up because I am not good with fine motor skills. It was hard knowing that I had to make the pudding if I wanted that tradition to continue. That these things were up to me. It is these realizations that make me feel older and sadder. Also, the fact I couldn't call him up for advice about the white sauce he pours on top. I've been harassing my aunt with questions so I am not totally in the dark but it isn't the same.
This experience continues to cement in my mind the importance of food and ritual in a family's mythology. We remember though action, taste and story. It is not always easy but it is important. Oh, and delicious!

Sounds good. Except you're supposed to make your pudding on Stirup Sunday in November or thereabouts, not Xmas eve imho. I still have two not eaten over the 12 days downstairs in the cool ripening, one suet and one butter based. Custard is ok but I prefer a boozy sauce. Suddenly my mouth waters.