The Menin Gate, and why you should vote #elxn11 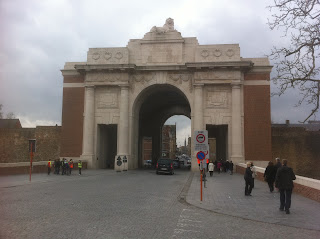 Earlier this year, I had the great opportunity as a storyteller to take part in the wonderful Alden Biesen International Stortyelling Festival in Belgium. It was a great experience, and wonderful to see so many storytellers working and sharing in so many languages.

Since I was in Belgium, I took some time off to explore some of the country's great cities, and I made certain that I visited some of the sites that have entered our consciousness as Canadians, sites with names that resonate with those of us who have never even visited Belgium, names like Passchendale, Flanders, the Ypres Salient.
At Ypres, on an appropriately grey day, I walked around the imposing Menin Gate. The gate is a memorial to those soldiers whose bodies were never found, 55,000 of them, which was erected on the spot where the soldiers left the city for the frontline, never to return. Even today, they are still digging the bodies of fallen soldiers out of the Flanders clay.

It brought the reality of that conflict home to me in a way that can only be described as emotional; and what struck me most as I walked through the impeccably kept graveyards of Flanders was how young all those soldiers were.
I came home from Flanders to a country facing an election.  In a world where young people are dying every day to for the right to have a democratic say in their own futures, I think we all too often forget about all those young men and women who died to protect our freedoms.
I've already made my vote in advance, as I'll be travelling to Hopedale, Labrador, on election day. If you haven't voted, you should.  The democracy that people died for works when we all make it work, together. You can make a difference with your vote.
To you from failing hands we throw
The torch; be yours to hold it high.
- John McCrae, 1919
Posted by Dale Jarvis at 10:23

Well said, Dale. A person can not visit those cemeteries and remain unchanged. Just as "the blood of the martyrs has been the seed of the church" so the blood spiled on the battlefields of Europe should inspire us to maintain our freedom.