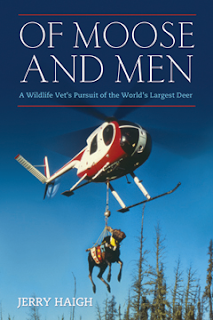 Jerry Haigh is a veterinarian who has worked with numerous species, including elephants, wild dogs, polar bears, and, of interest to those of us in Newfoundland, moose. He is also a fine storyteller and raconteur, who I met several years ago at the annual Storytellers of Canada-Conteurs du Canada conference. Some of you may remember his great night of nature stories in the Newman Wine Vaults a few years back, or his visit to CBC's Radio Noon Crosstalk.

I got an email a little while ago from Jerry, telling me his latest book was out, entitled "Of Moose and Men: A Wildlife Vet's Pursuit of the World's Largest Deer," now available on Amazon.com.

I asked Jerry about about stories about the introduction of Newfoundland's moose population, and this is what he told me:

"The account [of moose introductions] mostly comes from the recollections of John Nowlan, who was raised by the nephew of the leader of the team that caught the moose. It begins when the Newfoundland government of the day, still a British colonial government, requested some moose. One John Connell, a well-known hunter, hunting guide, and fisherman in the Miramichi area of New Brunswick, who was also well known for his tame saddle-broke moose Tommy, persuaded some friends to get involved in the capture. John thought that the men who were involved were paid $50 for each moose. 'That was a lot of money in those days!'

The team set out on snowshoes in the winter of 1904 and surrounded a group of moose that were yarded up and more or less stranded in the deep snow in the vicinity of the Bartibogue River. According to Nowlan: “Then they lassoed them—just like cattle.” Six captured moose were tethered to sleds and taken to the town of Chatham where they were put on a train. Surprisingly four of the animals survived the trip all the way to their new home across the water."

You can find out more about Jerry on his blog or follow him on Twitter at @glasgowwildvet.