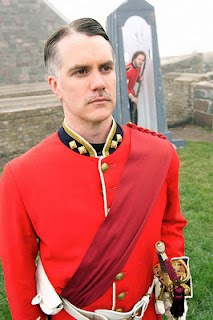 Well, it has been a fabulous run! A total of 33 shows, 3 storytellers, 90-ish rounds of black powder ammunition fired off, great crowds, media hits, a newspaper article, a guest appearance at the MUN Arts Alumni night, and not a single finger cut off with a bayonet. Not bad at all!

Thanks to all who helped out from Parks, including the lovely Lilly and Jacqueline, who were our live powder girls for most of the summer. And thanks to all of you who came and shivered and laughed and went home slightly more spooked than when you arrived.

If you haven't seen the show, tonight is your last chance for 2012. Tickets are limited, and we start at 8pm from the Signal Hill Visitor Centre. Tonight is a special night, as well, in that it is the 250th anniversary, to the day, of the Battle of Signal Hill, which figures so prominently in the show. Bring on the fog!