A ghost story from Topsham, Devon 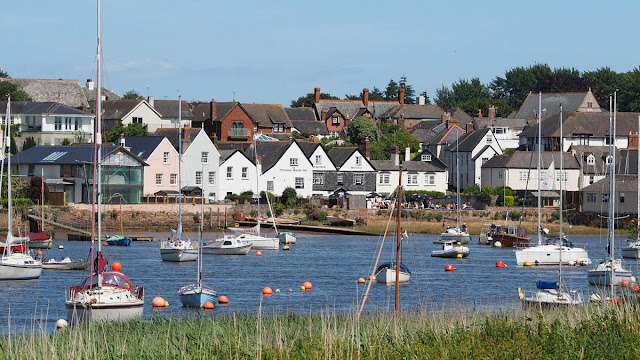 I started January of 2013 off by giving a talk on the folklore and legends of Wessex to the Wessex Society at the Marine Institute here in St. John’s.

The Society, which was founded by Dr. Otto Tucker, is a cultural organization formed to promote knowledge of and an appreciation for Newfoundland’s English-Wessex ancestry. Wessex (West Saxony) was the name of an old Anglo-Saxon Kingdom in southwestern England, and today it includes the counties of Devon, Dorset, Hampshire and Somerset.

According to the Society’s website, immigrants from Wessex began to settle in Newfoundland in the early 17th century. By the early 1800s they had founded numerous fishing villages and towns and comprised approximately 60 percent of the resident population.

When they arrived, the Wessex settlers in Newfoundland brought with them their folklore, their ways of speech, and their stories. It was these stories that intrigued me, as they are similar in many ways to our own legends of ghosts and fairies.

A colleague of mine, Colette, heard that I was giving the talk to the Wessex Society, and was instantly intrigued. She herself had experienced something ghostly in the village of Topsham, near Exeter in Devon.

“I have a very good friend who lives near Exeter in Devon,” she explains. “We were student midwives at the same teaching hospital and were even flat-mates. When we used to work night duty, the rotation (schedule) consisted of 8 nights on, 6 nights off.”

One time her friend invited Colette to her parents’ home in Devon. She had been there before and knew her parents well. Her mother had once been a nurse also and understood how exhausted the girls always were after a week block of night duty.

“She used to spoil us by bringing us tea and toast in bed in the morning, and cooking delicious lunches and suppers,” Colette remembers. “She used to get up early, before the entire household, to bake pies made from fruit that she had picked that morning from her own garden”

Colette was sleeping in a small rectangular bedroom, and had spread her suitcase out on what little floor space there was between the bed and the door.

“Before we went to sleep, my friend's mum said she would get us up in the morning, so we wouldn't sleep the day away,” Colette says. “Early on the first morning I heard my friend's mum enter the bedroom. She started approaching the bed where I was lying, in an unusual side-step fashion, as if she was stepping over obstacles in her way.”

The woman was bent forward, leaning over as if she was hunchbacked.

“As I knew I had spread my things over the floor, I did not want her to trip on anything, so to avoid her having to come into the room further to wake me up, I called out to her that I was already awake,” describes Colette. What happened next made Colette realize immediately that the figure was definitely not the mother of her friend.

“She was not carrying any tea or toast, and as soon as I spoke those words, she receded backwards and faded into the wall, the same wall that had the door on it, only to the other side of that wall, as she disappeared,” says Colette.

“That is my story!” she adds. “I was completely awake when I said out loud that I was awake. I was very scared, but my friend and her parents laughed it off. I have no idea if I was dreaming or in a light dream-state which made me think I was awake, but this is exactly what I experienced.”
Posted by Dale Jarvis at 15:34

Very interesting...Wow..! Somewhere I heard that my grandmothers' family whose name was Lambert possibly came from Exeter ....! What a history..!! What a fantastic life you lead Dale...I am jealous, in a good way of course..:-)