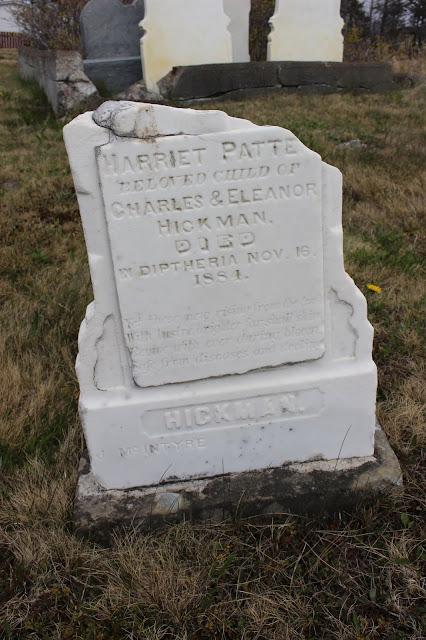 Recently, this stone caught my eye in the Old Methodist Cemetery in Grand Bank, Newfoundland. The stone reads:

Yet these now rising from the tomb
With lustre brighter far shall shine
Revive with ever during bloom
Safe from diseases and decline.


There are several markers from the 1880s in the cemetery noting that the individual interred died of diphtheria. Archivist Larry Dohey has noted, "A diphtheria epidemic raged throughout Newfoundland from 1888 -1891, medical officials identified at least 3,183 cases and it had resulted in at least 624 deaths."

Below: Uses of the words diptheria vs diphtheria, 1800-present

The "Yet these now rising from the tomb" epitaph is taken from Hymn 46 "The morning flowers display their sweets," published in "A Collection of Hymns, for the use of the people called Methodists" by the Rev. John Wesley, 1790, and is attributed to Samuel Wesley, Jr.:

THE morning flowers display their sweets,
And gay their silken leaves unfold
As careless of the noontide heats,
As fearless of the evening cold.

Nipt by the wind's unkindly blast,
Parched by the sun's directer ray,
The momentary glories waste,
The short-lived beauties die away.

So blooms the human face divine,
When youth its pride of beauty shows;
Fairer than spring the colours shine,
And sweeter than the virgin rose.

Or worn by slowly-rolling years,
Or broke by sickness in a day,
The fading glory disappears,
The short-lived beauties die away.

Yet these, new rising from the tomb,
With lustre brighter far shall shine;
Revive with ever-during bloom,
Safe from diseases and decline.

Let sickness blast, let death devour,
If heaven must recompense our pains:
Perish the grass, and fade the flower,
If firm the word of God remains.


The stone carving itself is attributed to J. McIntyre, and is most likely the work of the Standard Marble Works, a St. John's-based firm under the direction of James McIntyre, as advertised below in the Evening Telegram  of 1892-09-05. A high percentage of the monuments of the same period in the cemetery bear the maker's mark McIntyre or J. McIntyre. The stone is somewhat damaged along the top and top right, but it could have potentially been topped with a carved lamb, a common motif for the markers of children, and a motif seen on similar monuments in the cemetery.

Email ThisBlogThis!Share to TwitterShare to FacebookShare to Pinterest
Labels: cemeteries