That viral poem and photo? They aren't what you think they are. #askafolklorist #covid19 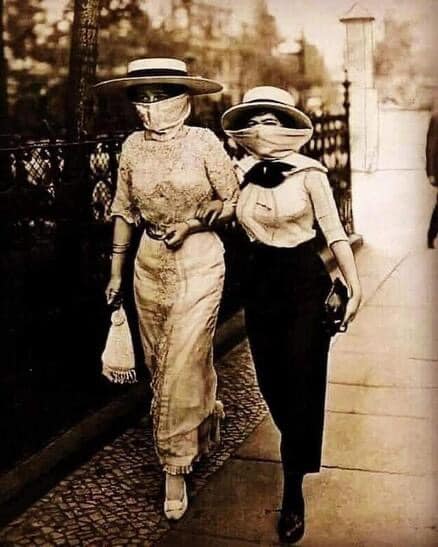 Chances are, if you've been spending more time on social media lately than usual, you may have seen the above photo with some variation of the following:

We will get through this together.....
A poem written in 1869, reprinted during 1919 Pandemic. Truly shows history repeating itself. This is Timeless....It was written in 1869 by Kathleen O’Meara:

‘And people stayed home
and read books and listened
and rested and exercised
and made art and played
and learned new ways of being
and stopped
and listened deeper
someone meditated
someone prayed
someone danced
someone met their shadow
and people began to think differently
and people healed
and in the absence of people who lived in ignorant ways,
dangerous, meaningless and heartless,
even the earth began to heal
and when the danger ended
and people found each other
grieved for the dead people
and they made new choices
and dreamed of new visions
and created new ways of life
and healed the earth completely
just as they were healed themselves’


Awesome, right? It's a great poem, made even better by its astonishing history, and the accompanying photo shows people getting about their business, and even looking fashionable, during one of the worst pandemics of the 20th century. If they can do it, so can we!

It is fabulous, except that the historical aspect of it is fabricated. It is a great story, but, surprise, not everything you read on the internet is accurate.

First, the poem. Kathleen O’Meara was a real person and her life sounds pretty interesting. She was an Irish-French Catholic writer and biographer, and wrote about women's suffrage and social reform. She died of pneumonia at only age 49, in 1889. She wrote novels, biographies of leading Catholics, and journal articles. She did not write "And the people stayed home."

The poem was written circa March 2020, in response to the current coronavirus pandemic. It was written by an Irish-American teacher coincidentally-named Kitty O'Meara, from Madison, Wisconsin. Her poem went viral online, and she was profiled in an article in Oprah magazine by writer Elena Nicolaou on March 19, 2020.

"It offers a story of how it could be, what we could do with this time," O'Meara told OprahMag.com of her viral work.

What about the photo taken during Spanish flu Pandemic? Surely that is the historically-true part of the viral phenomenon?

It is an old photo, but it predates the Spanish influenza pandemic of 1918-1919 (which was caused by an H1N1 virus with genes of avian origin).

The photo dates to 1913, and has been shared and shared again online through sites like Pintrest and via social media, and one of the earliest versions posted online was uploaded by the stock photo company Alamy. The photo comes from the archives of the former press empire of major Berlin publisher August Scherl. The Alamy online catalog includes this version of the photo:


Helpfully, it also includes the following metadata (information about the image):

More information: This image could have imperfections as it’s either historical or reportage.Ladies' fashion from 1913. New veil fashions, based on Turkish nose veils., 01.01.1913-31.12.1913Photographer: Scherl/Süddeutsche Zeitung PhotoDate taken: 1913


I'm not the first one to point this out, either. On April 6, 2020, actor Scott Baio tweeted out the photo. 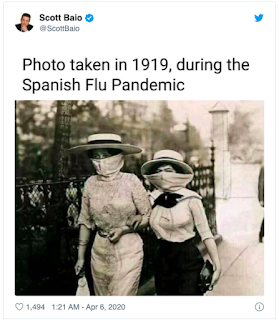 It was retweeted hundreds of times, and generated a response three days later from the Fake History Hunter twitter account @fakehistoryhunt who wrote:


Incorrect.Photo was taken in 1913, probably in Germany, years before the Flu pandemic began.This original description states that it is a fashion fad inspired by the Balkan war, they're wearing veils based on Turkish nose veils.


I'm guessing that the Balkan war referenced here is the First Balkan War, 1912-1913, which was tied into a very complex history of conflicts before and after that I'll let some military historian far more knowledgeable than I unpack. And if you want more information on how the conflicts of that era impacted fashion (and set the stage for designers like future Nazi-collaborator Gabrielle “Coco” Chanel) you can read Anja Reinthaler's article "Clothing during World War I - How the war influenced the fashion industry."


Why does this matter? "Whatever," you might say, "I still like the poem." It matters, in part, because your perception of history is being modified by unknown persons for unknown reasons, and there are a lot of historical precedents that teach us why that sort of behaviour is problematic.

Another reason it matters is that we are living in the midst of a historical event, and the works that are created now will be the history (and folklore) of the future. Kitty O'Meara of Wisconsin deserves to be recognized and remembered for her contributions, just as much as Kathleen O’Meara deserves to be honoured for hers.  The innovators of 1913 deserve credit for their creativity, and the global impact and historical echoes of local conflicts deserves proper study.

For more on how folklore is evolving and ever-present in times like these, check out Smithsonian folklorist James Deutsch's recent article "How to Detect the Age-Old Traditions of Folklore in Today’s COVID-19 Misinformation."

As I wrote above, not everything you read on the internet is accurate (sorry, Scott Baio). If you have more information on either the poem or the photograph, email me and I'll add it!

And if you want an awesome photo of badass women wearing face masks in response to Spanish Influenza, here you go: the St. Louis Red Cross Motor Corps on duty during the Oct. 1918 Influenza epidemic, from Library of Congress. 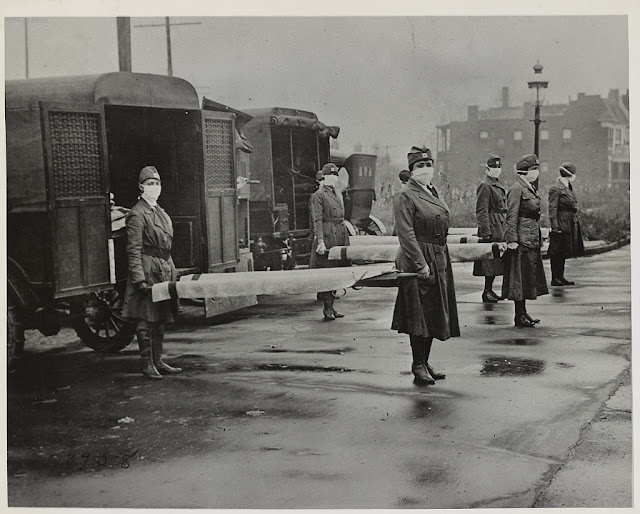 Keep safe, wash your hands, and watch what you post online.  I'm off to research Turkish nose veils.