The Ghost of Deadman's Pond and thoughts on recitations


This video is a small excerpt from my new show "Ghosts of Signal Hill", being performed every Friday night on Signal Hill, in partnership with Parks Canada. The video shows the performance of a recitation called "The Ghost of Deadman's Pond."

The recitation is my own adaptation of a poem written by E.T Furlong in the Newfoundland Quarterly Christmas Edition, December 1939 - Vol. 39(3), p. 27.  The original poem is quite long; I shortened it for performance. 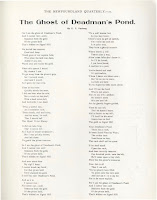 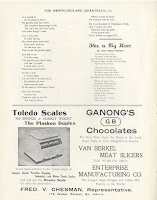 In writing the script for "Ghosts of Signal Hill" I very much wanted to include a recitation as part of the show. Recitations are roughly equivalent to the English tradition of monologues. Folklorist Kenneth Goldstein defined them as "a solo, stylized, theatrically mannered oral performance from memory of a self-contained dramatic narrative in poetic or prose form." It is one of those aspects of traditional Newfoundland performance that I love, a tradition which is still living in many communities.

Recitations, while sometimes told in private settings, were, and continue to be in many Newfoundland and Labrador communities, more often part of public performances, concerts and times. In a sense recitations are more highly formalized than oral stories, following a set text prepared in advance, and often, though not necessarily, in rhyming form.

Special thanks to Trevor Kearsey, Internet and New Media Officer with the Newfoundland East Field Unit of Parks Canada for filming and editing together this piece!
Posted by Dale Jarvis at 15:25

I grew up hearing snippets of this poem from my Grandmother who is one of Edward Furlong's daughters. Thank you very much for posting the entire thing.