Ghent: candy, breasts, and other fine things to nibble on. 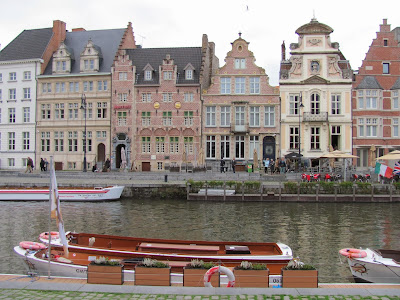 Today's adventures took me to the fabulous city of Ghent. I'd been here once before, but today I experienced it in a slightly different way. I've been staying with storyteller Veva Gerard, and from somewhere she got the idea that I'm interested in food. So she tracked down a tour through the old city that focussed on the history of the place told through food and food stories. Sounds terrible, right?

Off we went with Veva's son Jasper, braving clouds and rain, and we met up with our tour group near the castle Gravensteen. Everyone on the tour was Dutch or Flemish, except me, so the guide told half the stories in English, half in Dutch, with Veva doing yeoman's service translating on the fly.

Every story on the stop had some kind of food connection: a riot over the price of beer, a conceptual artist who wrapped the columns of a local building in ham, the location of the oldest corn storage houses in Ghent, and visits along the way to sample five kinds of candy, chocolate, three kinds of cheese, and three kinds of ham. 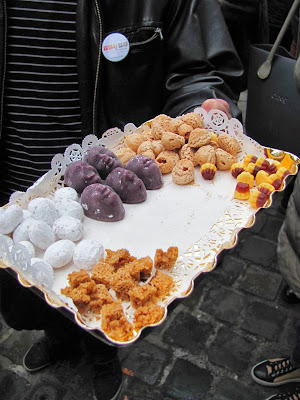 One of the best stories of the day was about the little chewy two-coloured candies on the right hand side of the photo above. They are known as Mammelokker (meaning something roughly like "to lure to the breast").

The legend of the Mammelokker is depicted in relief on the building of the same name which connects the Belfry of Ghent and the Ghent Cloth Hall. 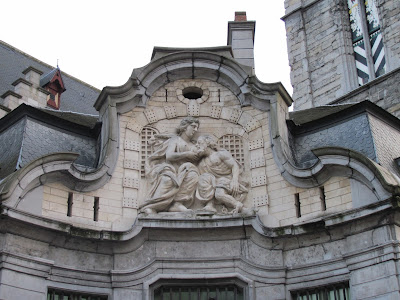 A man sentenced to death by starvation was allowed one visit ever day, provided that the visitor brought no food into prison. While other men died around him, that one man lived, even without food. Mystified, the guards watched the daily visitor, a younger girl, and saw that she offered her breast through the bars of the cell, feeding the man and keeping him alive. The girl was the man's daughter, and the court was so moved that they granted a pardon to the father. And now, you can relive that saga with a candy of the same name.

After the tour, we met up with Ghent-based storyteller Veerle Ernalsteen, who I met a few years ago at the Alden Biesen festival. Veerle tempted us further, into amazing tapas, and then a long conversation about stories, riddles and the Flemish storytelling scene in the very atmospheric Hot Club de Gand.

And now, some sleep, and then a sold-out storytelling performance tomorrow with Zus and Zo in Brabant!