The Family of Love, and Mary on a Stick - Welcome to Antwerp 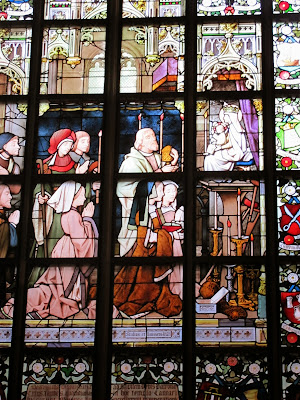 I'm in Belgium, a country I've grown to love. This is my fourth visit in the past three years, and every time I come, I learn more, and find more very cool places to explore.

I'm staying with my friend Veva Gerard, a Flemish storyteller, and her family, and yesterday Veva, her husband, and their son Jasper, and I, went off to Antwerp for a tour. Our tour guide for the day was the fantastically-knowledgeable Key Minnebo, who has been leading what she calls "esoteric tours" of the ancient city of Antwerp for 30 years.

We started in the courtyard garden of the Museum Plantin-Moretus, and Key asked me what I was interested in.  I suggested local legends, stories of the supernatural, hidden and secret places.

"We will start inside," she suggested. 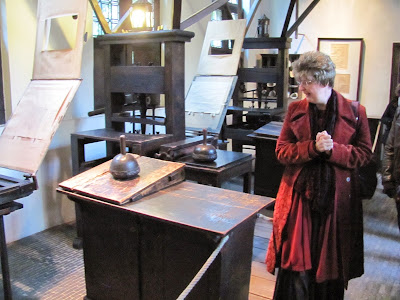 Inside she introduced us to Christophe Plantin, and a series of 400 year old printing presses. I could sense my father drooling, all the way from Canada.

Then things got interesting. Key gave a running commentary as we moved through the museum, giving us details on a mystic religious sect known as the Family of Love, or Familists, then drawing in secret societies, the Rosicrucians, Cathars, Freemasons, secret printings of heretical books, and (no-one was expecting them) The Spanish Inquisition. 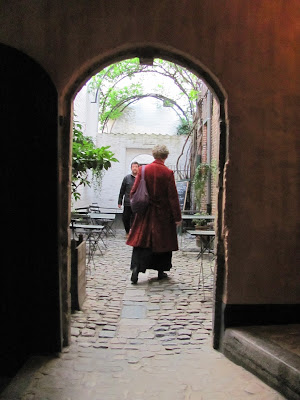 It was just the start of our tour. From there, we left the museum to explore more of Antwerp, where Key guided us through hidden alleyways, fertility cults, sacred geometry, miracles, and a statue of the Blessed Virgin Mary rumoured to get up and walk around Antwerp on Her own: 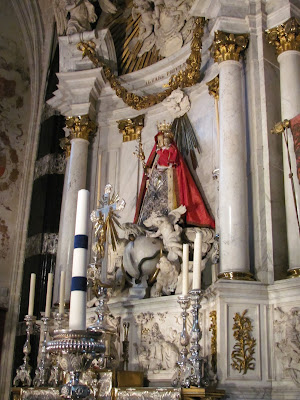 The, after that, debates over which of two holy relics of the foreskins of Christ were authentic (surprise! both of them!), paintings by Rubens, the entrance to heaven, the reason why Japanese tourists have been flocking to Antwerp Cathedral for years to find a dog that never existed, a breast-milk-stealing shapeshifter, more fertility cults, a possible statue of the ancient god Priapus (who had his legendary phallus removed twice from the image, ouch) , ancient wells, Roman heroes, dragons with the skulls of horses, giants getting their hands cut off, more Freemasons, and a possible job opportunity should the whole folklore/storytelling thing not work out for me, the delightfully named Keutelraper (Keutelraapster for ladies so inclined) - the person who went around and scooped up after the animals who once roamed the Cathedral.

The Cathedral boasts some fabulous legends of its own, including many stories (some contradictory) about the founding of the church. The one I liked concerned a statue of Mary which floated away from its original location, and was later found in a low piece of swamp. Locals were convinced she wanted to be there, and placed her on a stump in that location.  Eventually the cathedral grew up on the spot Mary on a Stick had claimed for her own. If you look closely at the stained glass window in the top picture here, you'll see Mary, and her Stick.

"Legends turn events into part of our collective memory," Key told us. For me, my introduction to Antwerp was certainly legendary, and I will always remember it as a place with a truly esoteric history.

All that, and we finished off in a fabulous local restaurant, where I had amazing Flemish rabbit, and tomato soup with lots of meatballs, which Veva tells me is something you would always get if you visited your Flemish grandmother.

So, to end, in honour of my trip to Antwerp, and that meatball soup, a little Flemish riddle from Veva:

Should the folklore/storytelling thing not work out, you can still try as a writer of itinerary (I had to look up that word). I love reading your posts when you are travelling again!
(And indeed, Antwerp is great and say hi to Veva from me, I met her on FEST last summer.)