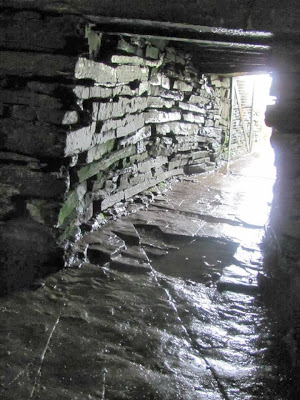 Yesterday, I flew back to Edinburgh and had a fabulous Nepalese meal with fellow Canadian storyteller Kathy Jessup. We were both here for the Scottish International Storytelling Festival, but while Kathy had been telling stories here in mainland Scotland, I had just returned from an amazing time on the Orkney Islands.

Kathy and I were talking about my trip, and then, and now, a day later, it is still hard to put into words.

While I was in Orkney, Orcadian storyteller Tom Muir told a traditional story about two men who had been walking home when they had spotted a open door in one of the neolithic tombs that dot the islands, light streaming out of the entrance. Hearing music, they looked in, and saw the trows (the local equivalent of our fairies) dancing. One of the men was so enthused he started to dance as well. His friend tried to pull him away, but the friend wouldn't leave. In the end, the friend left, leaving the dancing man behind. He didn't return home that night, nor the night after. Indeed, he didn't return at all.

A year passed, and on the same date, the friend was walking past the same tomb. Once more the door was open, light pouring out, with the strains of music on the air. He peeked in, and saw the man, still dancing. He tried to get him to leave once more, but he said he still wanted to keep dancing.

"You've been dancing for a year," his friend told him.

"No! It's only been five minutes!" the man exclaimed.

His friend hauled him out of the mound, and looking down, the dancing man saw that the soles of his shoes had been worn away from all that dancing.

That is sort of how I feel about my time in Orkney. When I was there, it was like I was there for closer to five months than the five days I was actually there, but now, looking back, it seems like it all passed by in five minutes.

I had the chance to meet and share stories with some amazing storytellers, including Bob Pegg, and Shetland's treasure, Lawrence Tulloch (more on Lawrence in another post).  I told in a town hall, a craft hub, a hotel, a pub, and other great locations, and along they way was shown incredible hospitality, ate a veritable mountain of cake, and visited some amazing archaeological sites ranging from the Neolithic to World War II. It is hard for me to describe what a fantastic time I had.

Thanks to everyone, Tom for being an amazing host, Bob and Lawrence, Erin for surviving living with us all, to Fran and Andy for being fantastic tour guides, all the other local tellers, volunteers, committee members, our Shetland storytelling groupies, the owners of the B&B where we told ghost stories, and everyone else who made me feel right at home.

(Photo taken inside the neolithic tomb at Cuween Hill, Orkney)