The Horse Who Saw A Ghost - Black Duck Brook. #FolkloreThursday 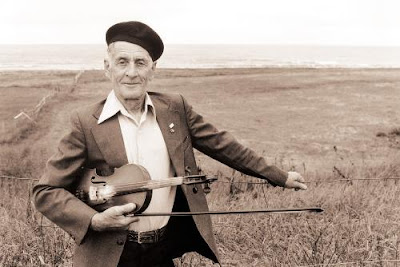 With a history of European settlement that stretches back to the Basques in the 1500s, the Port of Port Peninsula has heard many a strange tale over the centuries. It has also produced a number of tale tellers, one of the best known being Emile Benoit.

Emile Joseph Benoit was born in 1913 at L'Anse-a-Canards (Black Duck Brook) on the Port au Port Peninsula, son of Medee and Adeline Benoit. He began playing the fiddle when he was nine, teaching himself to play on a home-made violin. By the time he was seventeen he was a well known local entertainer, and he went on to achieve national and international recognition. He was also a respected storyteller, both of personal reminiscences and the older traditional tales.

When he was a young man, Emile had a run-in with a ghost which was visible to horses alone. One weeknight in March he hitched up his one-horse sleigh and went to visit his brother Ben. Ben lived at Three Rock Cove, a fishing community on the northwest shore of the Port au Port Peninsula. Three Rock Cove was originally named Trois Cailloux, or "Three Boulders", by migratory French fishermen who used it as an outpost.

Emile stayed there for a spell and had supper. After he had dined with his brother he decided that he would go visit his sister, Yvonne, who lived about a mile away. He told his brother that he would be back at 9 o'clock and set out.

The wind was blowing from the north east as Emile made his way down the pathway. When he got close to his destination, he had to open a gate and go across a field. About two hundred yards further along was the sister's house, at the top of a rounded hill. He tied the horse up behind the house and gave it a feed of hay.

When he went into his sister's house he found her there chatting with some young women around his own age. Engaged in the pleasant company of the young women, he didn't notice the passing of time until he realized that it was already nigh on 9 o'clock.

It was a clear, moonlit night as he started back towards his brother Ben's house. By the time he hitched up the horse and turned the sleigh around., the wind had all but died away. He cut a plug of tobacco and started to make himself a cigarette as the horse plodded along. Then the horse stopped.

It was a good horse, and one of which he was proud. Tall and well built, its mother was a racer, and the horse had some of her character. When he bought it, he had paid out two-hundred and fifty dollars for the horse, a sizeable sum in those days.

Busily engaged in the work of hunting for a match for the cigarette, the driver simply told the horse to keep moving. Sure enough, the horse started to move, but not in the direction Emile had intended, for the horse began to back up along the path, retracing its steps.

He told the horse to go on again, but the horse continued to back up.

Puzzled, Emile started to look around to see what was frightening the horse but could not see a thing. He looked along the line of the fence, and could see nothing in either direction. It came to his mind that if he looked between the horse's ears he would see exactly what the horse was staring at. Therefore he got up on the board at the front of the sleigh and looked up over the ears of the horse, but could still see nothing.

With an oath, he reclaimed his seat, took a good hold on the reins, and delivered a blow to the horse with the whip. The horse reared up, turning the sleigh around like a top, and was off like a flash of lightning, back towards the house they had just left.

Completely startled by the horse's actions, he lost the reins. By the time he had taken them back into his hands, the horse was back at the gate they had pass through shortly before. Emile got out of the sleigh, took the horse by the halter, and started to lead him by hand

At this the horse pounded its hooves into the ground, stamping and whinnying, making it clear it would not set foot on the path. When it became obvious that the horse had no intention of returning home that night, Emile gave in and led the beast back to his sister's house.

Somewhat surprised to see him back so soon, his sister asked him what had happened. He related the story, telling her that the horse would not go back along the path. Emile then asked his brother-in-law Fintan if he would go back with him. Fintan refused to go and then told him a strange tale.

When Emile tracked down the mailman and asked him if he would go out and try again, the mailman refused. So two cows were taken out of the barn and turned out into the field for the night, and space was made for Emile's horse.

Eager to get home, Emile left around four or five in the morning the next day. The weather was the same as it had been the night before, with not a drop of wind and with a layer of frost on the ground. The horse once more plodded along, and Emile watched his ears, to see if the horse would act up when it reached the same spot.

When they reached the spot the two horses had refused to pass, the ears did not give so much as a twitch. The horse passed by as if nothing had happened, and maintained it usual pace all the way home. The frost on the path showed that nothing had gone before them.

ears later, in the style of a natural storyteller, Emile related the strange occurrence to the folklorist Gerald Thomas. In turn, Thomas included the tale in his book "The Two Traditions", which deals with the French language traditions of the Port au Port Peninsula.

Emile never uncovered the reason for the horses' fright. He was certain, however, that whatever the two horses had seen, it must not have been a pretty sight, nor anything pleasant, to have frightened them that much. In Emile's own words, "it wasn't God for sure he seen. No..."

According to the late Ferryland native Ray Curran, horses on the other side of the province had similar experiences. Mr. Curran told me that along the Southern Shore, there are a number of large rocks alongside roadways said to be possessed by the devil. There was one in Renews and another in Tors Cove. Horses would run away once they approached these sites and many people were injured as a result of these boltings.

Dale Jarvis is an author, storyteller, and professional folklorist who splits his time between St. John’s and Clarke’s Beach, Newfoundland, Canada. The proprietor of the St. John’s Haunted Hike ghost tour, Dale tells ghost stories, supernatural stories, legends and traditional tales from Newfoundland, Labrador and beyond. The Haunted Hike is online at www.hauntedhike.com and you can like us on Facebook! Or better yet, come along and let us tell you a tale!

Photo: Emile Benoit, from The Telegram.
Posted by Dale Jarvis at 08:30