The Haunted Brigantine of Sound Island 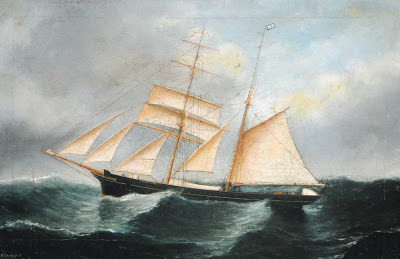 A ghost town is the perfect location for a ghost story. The former settlement of Sound Island, Placentia Bay, is proof of this. The first record of settlement is from around 1805, when William Cummins lived there. Thirty years later, the population had grown to close to 160. Today the island is uninhabited, but its ghost story lives on.

Before the days of resettlement, the people of Sound Island fished for cod and salmon and kept some cattle and sheep. In the mid 1800s Sound Island boasted a thriving fishery, concentrating on the grounds around Cape St. Mary's. The inhabitants also prosecuted the herring fishery, collecting the fish in nets and seines.

A report by the Department of Fisheries in 1898 stated that “this year, up to date, the Placentia herring fishery has been one of the finest on record. Enormous shoals of herring of the finest quality are reported, and an unusually large fleet of American and Canadian vessels are loading at Sound Island and other places in the bay.”

The herring fishery attracted workers from neighbouring communities, and one year a 19 year old from a nearby settlement acquired work on a herring boat. He made his way to Sound Island, but did not get there until around 9 o’clock at night.

The harbour was dark, but the young man recognized the brigantine he was to serve aboard. He found his way onboard only to discover he was alone. She was a nice vessel compared to what the man had worked on before, well fitted out with carpets on the floor.

Not knowing anyone in the community, and not wanting to rouse strangers from their sleep, the young man decided to sleep where he was. He found an empty cabin, close to the hold where the herring was packed, and settled in for the night.

Around midnight, the lad was startled from his slumber by a terrible commotion in the hold. It sounded as if people were quarrelling and fighting. It stopped for a while, and then started up once more. All of this fighting and arguing was carried out in a tongue the man did not understand, although he thought it sounded like Portuguese.

Leaving his bed to investigate, he made his way to the hold. Opening the door on the noise, and peeking in, he was terrified to find the hold empty. He was so frightened that he ran out, jumped overboard, and swam to land.

The next day, the crew arrived by another vessel. They were joined by the captain, who had spent the night in the house of a local fisherman. When the young man asked the captain about the noises in the hold, the captain said that the brigantine was haunted. This was the reason the captain had slept elsewhere!

The captain had first hand experience with the onboard phantoms. One night, alone on the brigantine, he had been reclining on his berth and smoking a cigarette. At around 9 o’clock, a man with his throat cut from ear to ear walked though the captain’s cabin, and vanished.

According to the captain, the brigantine had been brought up from the United States, but before that, the vessel had originated in South America. Wharfside rumour was that it had been a pirate ship, and that at some point in its history, the entire crew had been murdered.

With the captain and full crew onboard, no ghostly noises were heard. The name of the brigantine has been lost, and what became of it is unknown.
Posted by Dale Jarvis at 00:55