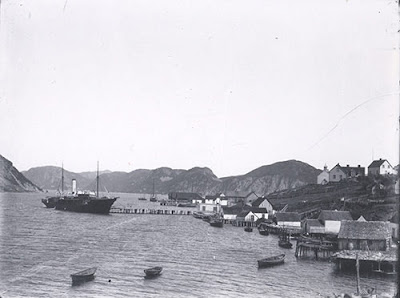 A couple years ago, Mr Doug Wells, of Harbour Breton on Newfoundland's south coast, sent me a series of articles on local culture, thinking the ones concerned with strange phenomena might be of interest to me.

“I had my students to write on local cultural and historical events,” explains Wells. “With a folklore background, I also encouraged students to write articles on folklore related practices. The attached articles are folklore/folklife related and represent Harbour Breton and some nearby resettled communities. Over the years of teaching Cultural Heritage 1200, students wrote approximately 150 stories.”

One of Wells’s students was Ryan Lambert, of King Academy, who wrote on the local tradition of what he termed “dirty weather lights.”

According to the Dictionary of Newfoundland English, a weather light is a gleam or flicker of light at sea thought to presage a storm. The Dictionary gives a few examples of how the phrase is used.

P. Delaney of Tor’s Cove is quoted as saying, “when you can see [weather] lights on the salt water at night, it is a sign of a storm ahead,” while E. Cokes of Head Bay D’Espoir is quoted as reporting that “weather lights in the riggings of a schooner is the sign of a storm coming. The lights start at the bottom of the riggings and move gradually up to the top where they disappear.

Lambert documents two examples of this luminescent occurrence from the communities of Miller’s Passage and Harbour Breton.

“In Miller’s Passage the dirty weather light would float slowly in through the harbour, through the tickle,” says Lambert, “and as it reached Shoal Cove it would turn around, float out through the tickle, out the harbour and vanish. The next day, as usual, the residents would get wind and rain – a disappointing day for fishermen. People noticed that the dirty weather light would follow the same path almost all the time. It was a frightening experience at first, but people soon grew accustomed to it and expected bad weather to follow.”

A similar weather light was also seen in Harbour Breton.

“It would be seen mostly by people living on the north side,” writes Lambert. “The dirty weather light would float in over Deadman’s Cove Road and travel slowly as far as the present town garage. It would then stop, turn around and head towards Deadman’s Cove again and then vanish. And again, probably as in all dirty weather light sightings, the weather would soon turn bad.”

Lambert also references a man by the name of Mr Joshiah Bullen, of Harbour Breton, who could vividly remember seeing the dirty weather light, both as a boy and as a married man.

“Mr Bullen describes it as floating just above the ground as bright as a good sized flashlight,” says Lambert. “Some members of Mr. Bullen’s family would be scared of the light, especially his wife, Meta, after she moved to Harbour Breton from Little Bay West in the early 1940s.”

Mr Bullen noted that once houses were built in the area, the light was never seen again.

“He says that you could expect to see the dirty weather light when there was a bad weather look in the sky,” says Lambert, “and, most generally, the weather would not be fit for anything after the light was seen.”

Weather lights are a truly persistent bit of Newfoundland folklore. I would be very curious to know how many other people have memories of local stories about weather lights, or if they’ve ever seen one themselves. If you have, or know someone who might have a memory to share, you can email me at dale@dalejarvis.ca

Photo of Harbour Breton from the collection of Doug Wells.