Getting to the bottom of some bottomless pond legends for #FolkloreThursday 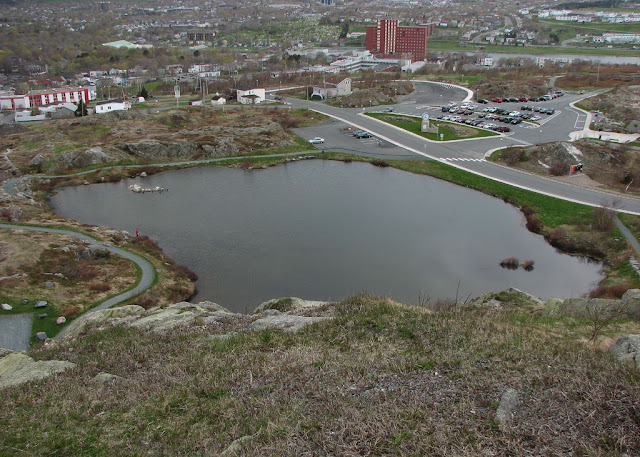 Nestled between Breakheart Hill and Bennett's Point is the village of Champney's West in Trinity Bay. Across the Tickle from Champney's West is Fox Island, which is connect by an isthmus to the mainland. Within the isthmus is a deep freshwater pond, surrounded on either side by stony beaches.

The pond itself is famous for being bottomless, one of several reportedly bottomless ponds in Newfoundland. The best known of these is probably Deadman's Pond in St. John's, one of the tales we tell as part of the Ghosts of Signal Hill program.

Legend holds that the bodies of executed criminals were displayed on a gibbet at Gibbet's Hill. After a time the bodies were cut down and loaded into barrels. Upon being weighed down with rocks they were then rolled into Deadman's Pond. Deadman's Pond was believed to be bottomless, thus quickening their descent into hell.

A direct portal to Hell in St. John's East? Gothic stuff indeed, and as firm a fixture of St. John's folklore as the miles of tunnels everyone knows are just waiting to be found underneath Water Street. Firm enough in fact to steel the determination of a film crew from Space: The Imagination Station, Canada's national science fiction and fantasy cable station. They arrived in St. John's several summers ago as part of a cross-Canada odyssey to explore the unexplained.

After having invested in a boat rental and trolling Deadman's Pond, the adventuresome Torontonians demonstrated on national television what every Townie could have told them ahead of time, should they have felt so inclined. Deadman's pond has a bottom. It isn't even that far from the surface.

While I personally have not plumbed the depths of the Fox Island pond, something tells me that it probably has a bottom as well. Well of course it has a bottom, and we all know it. Most of us accept that we live on a spherical planet, and the idea of a pit that truly goes on forever is fantastic. We live in an era where satellite technology allows us to map the ocean's deepest abyss, and unless NASA is holding something back, no direct entrance ways to Hell have been discovered.

But legends like those of Fox Island Pond and Deadman's Pond continue to circulate, be retold, and find their way into tourist literature. Why do we continue to tell these tales, and why does the idea of a bottomless lake continue to hold such a grip on our collective imagination?

Part of it must be the fact that Newfoundlanders love a good yarn, even those (or perhaps especially those) known to be less than one hundred percent accurate. But maybe it goes deeper than that, if you will pardon the pun.

Legends and tales of bottomless pits, lakes, and ponds are almost universal. Lake on the Mountain Provincial Park near Kingston, Ontario has a bottomless lake. So does Budapest and the town of Agias Nikolaos in Crete. There is even a Bottomless Lakes State Park near Roswell, New Mexico.

These lakes and ponds offer us tantalizing doorways to another realm. Sometimes this other realm is stated as in the legend of Deadman's Pond, and sometimes it is left unsaid. But peering into the reflective surface of a still body of water and wondering what lies beneath provides us with a link to the unexplained. Perhaps this is why they fascinate us. It is not so much that we think they actually are bottomless, but that part of us wishes that they might be.