The Headless Ghosts of St. John's, The Featherbed, and Red Bay. 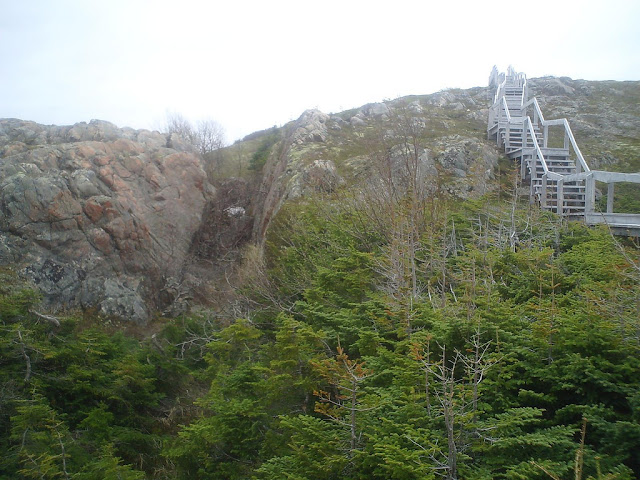 The ghostly horseman spotted by Icabod Crane in Washington Irving’s classic tale “The Legend of Sleepy Hollow” may be the world’s most famous headless ghost, but the mythical Sleepy Hollow is not the only location to boast such a creature. Tales of headless horsemen and other headless phantoms can be found all over the world, from North Carolina to the community of Croydon in the United Kingdom.

We can all be proud of the fact that Newfoundland and Labrador ranks right up there with other haunted locations around the globe when it comes to headless ghosts.

Travelling along Labrador's northeast coast in 1995, I was told stories of a strange man without a face who haunted the now abandoned community of Hebron, Labrador. I once collected a story from a man in Heart’s Content who saw two headless monks. And Newfoundland author Robert Parsons once shared a story with me of a headless ghost from a spot called the Spring Well, in Lawn on the Burin Peninsula. That phantom was rumoured to return to the Spring Well each year, forever searching for its missing head.

The oldest recorded St. John’s haunting that I know of dates to around 1745, and true to form, a headless ghost takes centre stage.

According to local legend, Samuel Pettyham was a St. Johnsman who rented a small house at the end of a lane off Queen's Road.

Pettyham had been visiting a friend in the west end of town. As it was late, his host offered to drive Pettyham home in his carriage. As the horse drew near to the laneway, it stopped suddenly, and refused to move an inch further forward. Pettyham offered to walk the rest of the way.

About twenty yards along, a spectral figure stepped out into the moonlight. Pettyham took one look, and turned and fled in absolute horror. The figure he had seen was that of a very tall man, missing his head.

Pettyham raced back up along Queen's Road, burst into a boarding house, swearing he would never spend another night in his house.

As if one headless ghost is not enough, Signal Hill boasts two. One legend concerns the ghost of Tommy Connor’s Gate, a story which has been circulating Signal Hill for at least sixty years.

Tommy Connor’s Gate was located right across from where the Battery Hotel now stands. The property had at one point been farmland owned by the Barnes and the McGrath families. The original farm house had been torn down in the long forgotten past, but the gate had remained for many years.

The gate was a big wide one which would open up to allow a cart to pass through, with concrete posts on either side. While there was nothing special about the gate itself, the ghost that appeared alongside it was another matter. People would see the ghost of a man standing by the gate, missing his head, but holding his hat in his hand. As a result, everyone was scared to pass it.

While the gate was named after a local man, no one was certain who the ghost was exactly. It was believed it was the spirit of a man named either Fitzgerald or Fitzpatrick, who died (or was possibly killed) on the spot. In life, he had been known to stand by the gate or to sit on a little chair alongside it, looking after his property.

Much more frightening was a different spirit, believed to haunt another location on the historic hill. That ghost was said to be the spirit of a huge African pirate, missing his head.

Pirates, it seems, were forever losing their heads in Newfoundland and Labrador’s days of yore. Indeed, headless buccaneers seem to be rather common figures on our foggy shores. Many a community claims to have a pirate ghost, minus his noggin, guarding yet-to-be-discovered chests of gold.

Lower Island Cove is one example. Its headless pirate was said to haunt a spot known to locals as The Featherbed on the north of Flambro Head. In the days before electricity, The Featherbed was said to be a rather foreboding place, often wreathed in mist and fog.

“What proved the undoing of many a traveller was the common sighting of a headless spectre that came out of the mist,” writes Morris. “He was said to be dressed in pirate’s garb complete with sword in hand, everything except his head which was cleanly removed as if by a rival's blade!”

Newfoundland's long, unprotected shoreline with thousands of bays and inlets made it a perfect hiding spot for pirates in the sixteen and seventeen hundreds. While it was far from the gold-rich shipping lanes of the Caribbean, the fishing communities of the island were easy pickings for battle-hardened pirates. As well, its position at the mouth of the St. Lawrence River made it a good base of operations to raid ships sailing to the colonies of New France and Nova Scotia.

Such a rich history of piracy gave rise to countless local legends of pirate gold and ghostly guardians. One of my favourite of these tales is from Red Bay, Labrador.

In 2003, the town constructed a new walking trail up over Tracey Hill. If you climb the 689 steps to the top of Tracey Hill and look around, you will be rewarded with an amazing panoramic view of the town and the coastline. If you are lucky, you might spot a ghost, and if you are truly blessed, you might find a buried treasure.

The local folklore of Red Bay tells of the infamous pirate, Captain William Kidd, who was said to have hidden a treasure at the bottom of a small body of water known as the “Pond on the Hill” close to the summit of Tracey Hill.

In the story, the pirate cut off the head of one of his crew, and tossed the body on top of the loot. The spectre of the unfortunate headless man was believed to appear at midnight, acting as the treasure’s ghostly guardian.

As part of the walking trail up Tracey Hill, the town erected a series of interpretive panels. The panel closest to the Pond on the Hill reads:

“Some adventurous locals from Carrol’s Cove (a small resettled fishing village west of Red Bay) in earnest attempted to drain the Pond on the Hill, therein unlocking the mystery of the buried treasure. During nightfall, nature unleashed its fury in an unforgettable display of thunder and lightning. These men were gravely superstitious and were convinced that the headless man was returning!”

The men of Carrol’s Cove quickly abandoned the search, and never returned. The event was such that no other attempts have been made to procure Captain Kidd’s treasure.
Hear the story of the Red Bay treasure on TikTok

I have a pretty creepy ghost story from my experience working at the heritage shop in Cabot Tower! I'll have to share it with you sometime. - Sarah