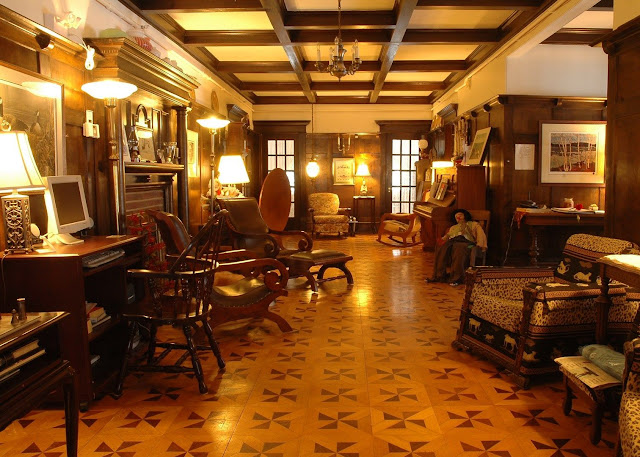 Leaside Manor was constructed in 1921 by John J. Parker, of legendary Parker and Monroe local footwear retail chain, and his new wife Flora. The couple named the property ‘The Lea’ meaning ‘meadow.’  The Lea was designated a Registered Heritage Structure by the Heritage Foundation of Newfoundland and Labrador in 1997 because of its architectural and historical values, and the Foundation's website notes:


Architecturally, The Lea is significant because it is one of the only Tudor revival style mansions in Newfoundland. Built in 1920, the style of this house was inspired by the architecture in the United Kingdom. This two-storey, cedar shingled building boasts many of the features typical of the Tudor style including an asymmetrical façade, small diamond shaped leaded-glass windows and a dominant front facing gable. Aside from the sheer size of this home, the wealth of the original occupants was also translated through its exterior decoration. Eaves bracketing and finials were used to highlight the roof and bay windows while arched doorways and columns brought attention to the entranceways. Inspired by the low beam ceiling in the Doulton family home in Scotland, one of the unique aspects of The Lea is the large reception hall with its panelled walls.

Historically, The Lea is significant because of the prominent family associated with it. The original owner, John Parker, was best known for the famous Newfoundland shoe Company, Parker and Monroe, which he gained ownership of from his father, James Francis Parker. During the early 20th century many residents of Newfoundland and Labrador relied heavily on the urban distributors for supplies, in this case durable footwear. Along with several outlets that sold shoes and boots, the family also ran a shoe manufacturing plant that produced up to 100,000 pairs of shoes annually.

Leaside Manor is currently owned by Dion and Dora Finlay, and Sweetline Theatre is delighted to partner with them to present Shakespeare's Fairytales! It is a fabulous building, and there is the option for show-goers to book a package deal that allows you to see the show, spend a night in the manor, and be treated to breakfast the next morning!

A special room rate with two tickets is available from Leaside Manor. Tickets can be purchased online directly from Leaside when booking your reservation at www.leasidemanor.com or call 709-722-0387.


Or, if you simply want to come see the show inside this fabulous old building, you can do that as well!

(advance tickets can be purchased with credit or paypal, all sales at the door cash only)