Or at least it is for storyteller Dale Jarvis, creator of the award-winning ghost tour, the St. John’s Haunted Hike. No stranger to strange stories from old St. John’s, Jarvis has created a new storytelling show for Newfoundland’s most historic hill.

Ghosts of Signal Hill is Jarvis’s newest work: an evening of ghost stories, historical tales and strange adventures. His spooky stories are spun out for eager listeners by lamplight inside the historic Queen’s Battery Barracks, overlooking the Narrows, the entrance to St. John's Harbour.

“There are ghost tours in other historic sites across Canada,” says Jarvis. “Halifax Citadel has a ghost tour, for example, and it seems like a perfect fit for St. John’s. And you couldn’t ask for a more dramatic setting than Queen’s Battery to tell a tale.”

The last North American battle of the Seven Years' War between England and France was fought on the Hill in 1762, after St. John’s had been captured by the French. In September of that year, the British reclaimed the town, marching overland from Torbay.

“The 1762 Battle of Signal Hill provides a great backdrop for the show,” says Jarvis. He portrays a real historical character in the piece, a role he shares with local actor Jedediah Baker.

“Lieutenant Ranslaer Schuyler was a member of the British force sent to take back St. John’s,” explains Jarvis. “We’ve brought him back to life for this show, so to speak!”

Jarvis is passionate about local history and folklore, and believes storytelling is a great way to get people interested in what is often portrayed as a dry and dusty subject.

“When someone starts going on about dates and battles and generals, people tune out,” says Jarvis. “But when you tell a story about real characters, with drama and intrigue and mystery, people love to hear more. That is part of what makes this show much fun. That and the ghosts, of course!”

Ghosts of Signal Hill runs every Friday night at 8pm until September 16th. Tickets are $15 ($10 for kids 12 and under) and are cash sale only, available at the Signal Hill National Historic Site Visitor Centre. There is no performance on Canada Day, July 1st. 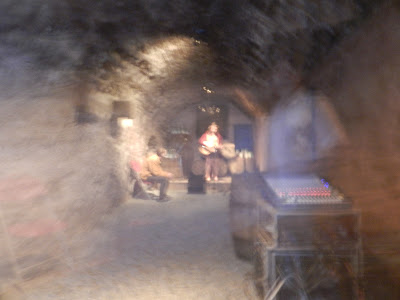 Got a suggestion? Let me know!
Posted by Dale Jarvis at 09:38 No comments:

1997 was the year of the John Cabot celebrations in Newfoundland. According to legend, heresay, and the provincial tourism department, John Cabot had landed in Bonavista (and definitely NOT Cape Breton) five hundred years before. The Matthew sailed into port, tourists descended, and I started a little summer business called the St. John's Haunted Hike.

Fourteen years later, the Hike is still going strong. We've just started up our season, with people already showing up in the cold and drizzle to hear our stories. So, if you are downtown these evenings, you'll likely see myself, or one of my long-time guides Dave Walsh or Steve O'Connell, leading a group of tourists and fans of the paranormal from site to haunted site.

The Hike runs every Sunday to Thursday evening at 9:30 pm from the stone steps of the Anglican Cathedral on Church Hill. Tickets are $10, with no need to book in advance.