Once Upon a Journey - Storytelling performances in Scotland, Belgium and Netherlands

“After two days' sail they sighted another shore and landed on an island to the north of the mainland. It was a fine, bright day, and as they looked around, they discovered dew on the grass. It so happened that they picked up some of the dew in their hands and tasted of it, and it seemed to them that they had never tasted anything so sweet.”
- Leif Erickson’s Voyage to Vinland, The Greenlander’s Saga

It’s official. I have my work visa in my hand, tickets booked, and I’m ready to go. This fall, I’m heading off on a storytelling pilgrimage with tales of adventurers and heroes, factual and fictional, travelling to Scotland, Belgium and Netherlands, and spinning yarns from Newfoundland and Canada for European audiences.

This year, Orkney is celebrating the 200th anniversary of the birth of John Rae, the Scottish doctor who explored Northern Canada, surveyed parts of the Northwest Passage and reported the fate of the Franklin Expedition. So, in the words of one of the festival organizers, “we are all about Canadians in 2013!”

My performances in Scotland and beyond will revolve around this theme, and I’ll be telling historical stories from Newfoundland, including adventure stories of early European visitors to this part of Canada, as well as stories of Newfoundland’s legendary wanderer and explorer, Jack.

From Scotland, I head to Belgium, where I’ll be teaching workshops, and on November 3rd, performing a set of ghost stories alongside Zus & Zo (fabulous Flemish storyteller Veva Gerard, her wonderfully talented, accordion-playing sister, and a double bassist).

Then, from there, off to the Storytelling Festival Amsterdam, where the theme of the festival is "Searching for the New World." I’ll be performing alongside noted Canadian storyteller and author Dan Yashinsky, as well as The Global Savages, the Anishnaabeg Storytellers of Manitoulin Island.

Stay tuned, as I’ll be posting notes from along the storytelling pilgrimage route. Thanks to the Newfoundland and Labrador Arts Council for their travel support!
Posted by Dale Jarvis at 08:13 No comments: 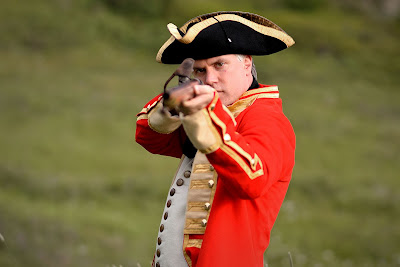 This has been our third summer for Ghosts of Signal Hill, and this weekend is the finale. It's been a great run, again, and I want to thank everyone at Parks Canada for all their help and support, Chris Hibbs for the photography and for splitting the role of Lieutenant Schuyler, and the staff of the Cabot Tower Heritage Shop for flogging those brochures!

We finish with two shows, one tonight, and our last one Saturday night, both at 8pm. Thanks to everyone who came out this summer and hiked up the hill to listen to our stories. If you haven't seen the show yet, you have two chances left!
Posted by Dale Jarvis at 08:37 No comments: