The Wolves of Deadman’s Cove - #FolkloreThursday

Doug Wells, a retired teacher in Harbour Breton, Newfoundland, sent me a series of articles on local culture. From curing warts to local legends, the articles give a wonderful introduction to the folklore of Harbour Breton and area.

"I had my students to write on local cultural and historical events,” says Wells. “With a folklore background, I also encouraged students to write articles on folklore related practices. The attached articles are folklore/folklife related and represent Harbour Breton and some nearby resettled communities.”

“Over the years of teaching Cultural Heritage 1200, students wrote approximately 150 stories,” Wells explains. “The stories were worth so much towards the student's course evaluation. They were also submitted to our local paper as well, the Coaster. Our classes section of the paper was called Culture Corner and was quite popular with locals, especially with seniors.”

One of the Culture Corner research projects was completed by students Melissa Skinner, Damian Power and Joanne Hynes, of King Academy, in 1997. The three of them worked to retell the legend of Deadman’s Cove.

During the class research, they found many people had stories of shipwrecks and bodies associated with Deadman’s Cove. One story, however, stood out. This was a particularly thrilling tale which had been written down Ron Rose of Harbour Breton, sometime around 1975.

“It is said that a ship was sailing along our coast (now called Deadman’s Cove), and the crew members were of a very wicked and sinful nature,” wrote the student authors. “They were so wicked that death came upon the whole crew by way of a shipwreck upon the rocks at Deadman’s Cove. Their evil spirits haunted the coast in that area.”

According to local folklore, the evil spirits of the wrecked sailors either took on the form of savage wolves, or possessed the bodies of wolves in the area. It was reported that several sailors met an untimely end due to these fearsome creatures.

“One day a woman, who was a very good person and had never been bad, went to the beach,” the students continue. “When the wolves were about to leap on her, they all fell dead on the ground in front of her. It is said that God saved this woman because she was good, and goodness triumphs over wickedness.” 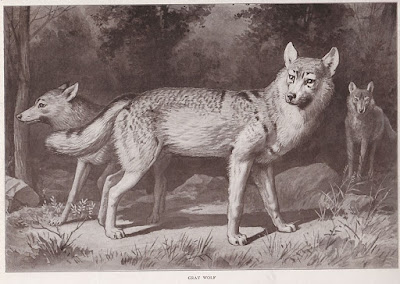 John Maunder, in a research paper revised and updated for the Newfoundland Museum, traces the somewhat colourful history of the wolf in Newfoundland history. According to Maunder, the first written mention of wolves on the Island, dates to 1578. Captain Edward Haies, a member of Sir Humphrey Gilbert's expedition of 1583, also mentioned wolves.

“From that time onward, a great many Newfoundland letters and journals contained at least minor references to the species, so great seems to have been the fascination with wolves in the early days,” says Maunder.

By about 1930, sadly, the Newfoundland Wolf was extinct, existing only as a few specimens, and an occasional local legend like that of Deadman’s Cove.

Special thanks to Doug Wells for the story and photo. This story appears in my book Haunted Waters, available as ebook for Apple, Nook, Kindle, and Kobo!