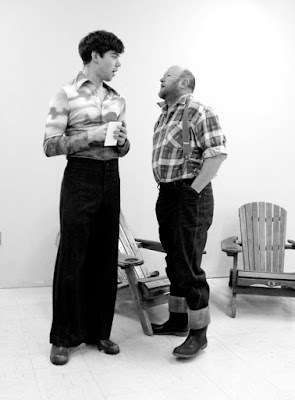 While learning about farming from a couple of ‘old fellas’, a young city actor stumbles upon a decades old mystery. The Drawer Boy is a funny and heart-warming play that weaves a tale of friendship, storytelling and remembrance.

This modern Canadian classic by Michael Healey is directed by award-winning director Danielle Irvine and runs in the Basement Theatre of the St. John’s Arts and Culture Centre.
Opening Wednesday, February 2nd, The Drawer Boy starring veteran actors Bruce Brenton (The Tempest and Sound of Music) and Steve O’Connell (Republic of Doyle and Woman in Black) and up and coming young actor Brad Bonnell (Diary of Anne Frank and Troilus and Cressida).

Haunted Shores: True Ghost Stories of Newfoundland and Labrador by Dale Jarvis is now available as an ebook through Kobo and chapters.indigo.

From the northern shores of Labrador to the south coast of Newfoundland, there are as many ghost stories as there are bays and inlets. The province of Newfoundland and Labrador is rich with tales of ghost ships, mysterious lights, sinister spectres, tokens of impending death, headless pirates, and murdered loves. From legends of phantom loggers to stories of possessed teapots, Haunted Shores: True Ghost Stories of Newfoundland and Labrador is an eerie exploration of the phantom-filled nooks and crannies of the province. Why does a mournful lady ghost return to Arnold's Cove every November? Do ghostly submarines still sail the waters of Trinity Bay? What is the most haunted street in St. John's? Drawn from both archival sources and first-hand accounts, the stories herein weave together anecdote, oral tradition, history and folklore to form a rich tapestry depicting a rarely explored side of Newfoundland and Labrador. Read the ebook, if you dare…
Posted by Dale Jarvis at 09:37 No comments:

Happy New Year! A new season of storytelling is upon us, and we've got most of our hosts lined up for the 2011 Storytelling Circles at the Crow's Nest. We've got some old favourites, and some new ones, including a special visit in July from Massachusetts storyteller Karen Chace. We're also talking with the Folk Arts Society about co-hosting a Story Slam in March, so stay tuned.

Our first night in January is a bit later than usual. We've had to shift the date to January 20th, so mark that on your calendars.

Our first host of the year, Crystal Martin, is a multimedia graduate who grew up in a tiny fishing village and enjoyed many Newfoundland traditions including storytelling. Today Crystal's hobbies includes gathering information on her family history, and preserving the memories of home with interviews, film, and restoring old photographs of relatives. She has also performed in numerous drama productions including the play "No Man is an Island", and has taught the piano during most of her teenage years. Crystal has been telling stories at the storytelling circle since fall of 2009.

You can see who will be hosting for the rest of the year at http://www.storytellingstjohns.ca/circle.html. We'll be adding other hosts as they are confirmed.