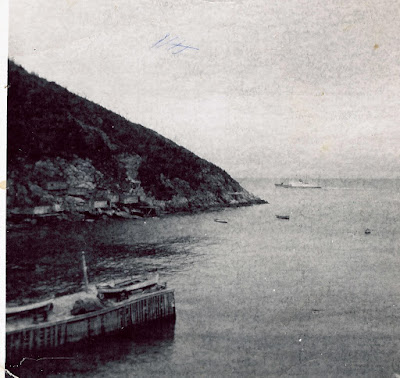 By Dale Jarvis
The sighting of mysterious lights is part of a great and honoured tradition here in Newfoundland and Labrador. There are stories too numerous to count of an eerie light that will appear in times of danger or which is followed by a tragic incident. They also often appear specifically to lead foolish or unsuspecting travellers astray, into bog holes, or over cliffs.

These strange lights are not always evil or dangerous, neither do they always lure travellers into treacherous areas nor to their doom. In one documented case, one such light actually led the Reverend Canon Noel and his good wife to safety during a blizzard outside Harbour Grace. Sometimes these mysterious apparitions appear for no reason at all, content to merely flit, gambol and cavort in the dark shadows of the Newfoundland night.

There are those in Newfoundland and elsewhere who will tell you that these strange lights are a type of fairy or possibly even a spirit. In the United Kingdom the phenomenon is known as a Hinky-Punk, a Hobby-Lanter, or a Joan-in-the-Wad. Another English name is the Jill-Burnt-Tail, who is deliciously said to be a more flirtatious, female version of the light. In Newfoundland it is known as a corpse candle, a Will o' the Wisp, or a Jacky Lantern. Around La Scie the otherworldly glow is recognized as no one less than Jack the Lantern.

Not far from La Scie is the community of Shoe Cove. It is about ten km southwest of Cape St. John, the western headland of Notre Dame Bay. The Cove itself is a steep-sided, open bight about two km wide. Today the Cove is a much different place than it was before Confederation. Before the days of Joey Smallwood and the pains of resettlement, there were many smaller settlements including Stage Cove, The Bight, The Brook, Caplin Cove and Beaver Cove. Since Confederation most these sites have been abandoned. One of these abandoned sites, The Bight, was said to be a favourite stomping ground of Jack the Lantern.

Growing up in Shoe Cove Bight in the years before Confederation, the young men of the settlement heard the old fellows talk about Jack the Lantern. Skeptics to a man, the youngsters never put much faith in any of the stories. One of the older men who kept the legends alive lived down by the shoreline, and he claimed that he had met Jack the Lantern first hand.

Years earlier, this gentleman had seen a light coming in from the water. Thinking it was a boat coming in to land on the beach, he went down to meet it. He watched the light come in, but when it came close its forward movement slowed. In fact, the light did not land on the beach at all. Instead it chose to move parallel to the shore, just the same as if it were a man with a lantern in his hand, walking on the water.

Time and again they heard the tales. But the young men considered the stories told around hot stoves and in the camaraderie of the fishing sheds nothing but old foolishness, and they paid their elders no heed. If they thought of Jack the Lantern at all, they must have figured they just were as likely to meet the Man in the Moon himself, with his own lantern, dog and bush of thorn.

One night around September, a group of three or four of the boys were over in La Scie. The terrain between La Scie and Shoe Cove Bight made overland travel all but impossible, so the boys were used to taking a punt and rowing home.

The boys set off in the punt. When they looked up along the shoreline, they all saw a light upon the water. Just after they came out into the water a little further, the light started to come down closer to them. When it got down closer alongside of them it shone dimly in the night, like the low glimmer of a dull flashlight.

The light came close to the bow of the rowboat. And there it stayed, matching the speed of the vessel. One of the fellows, more brave or more foolish than the rest, tried to reach it with the paddle. No matter how hard the lad tried, he could not get handy to the glow. The light remained tantalizingly out of reach, silently hovering only about five or eight feet away, bobbing out of striking distance of the paddle.

When the boys reached the Bight, they turned in towards shore and the more familiar lights of home. At that time there was no wharf, and the locals of the Bight were accustomed to tie their craft off on the collar, a place near shore where boats were moored for safety.

The light was persistent in its attention, or perhaps it was curious as to what would take a punt full of young men all the way from La Scie to Shoe Cove Bight so late in the evening. For whatever reason, the light followed the punt to where the boats of the settlement were on the collar. As they turned in towards land the light thought better of its bold advance and turned out.

Where the light had been small and dim all the time it had followed the punt, it now started to change and swell. As it moved off into the distance it got both bigger and brighter. When it reached a spot approximately half a mile off shore, it had grown significantly in size and luminescence.

Looking back, the boys were witnesses to an unbelievable sight. The tiny flame-light glow had metamorphosed into a burning mass of light. As the watched, the light changed into something that looked all the world like a ship all lit up, or like a schooner sailing past with its lights lit, and lights all up along the masts and rigging.

They tied up the boat and made their way to their respective homes, minds awhirl with the events of the evening. Much later, the boys spoke of what had happened and of their meeting with Jack the Lantern. And if they themselves were not believed at the time, that perhaps was their reward for their being so disbelieving at the start.