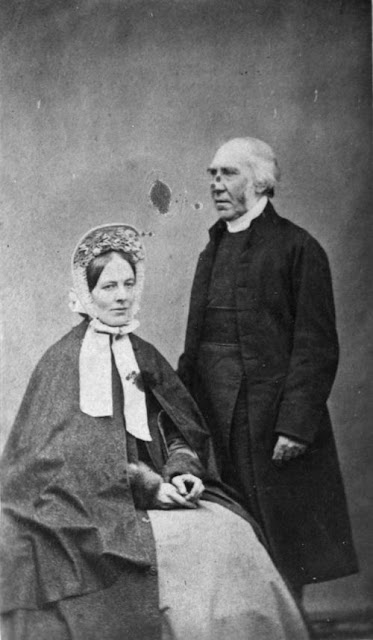 The second wife of Bishop John Medley, first Bishop of Fredericton NB was Margaret Hudson Medley. Well educated and independent, she was a choral singer, gardener, botanist, lithographer, horseback rider, and ice skater. It was rumoured that prior to her marriage she served alongside fellow nurse Florence Nightingale in the Crimean war.

Margaret survived her husband and was fiercely protective of his reputation. When she passed in 1905 at the age of 84, she was entombed beside him beneath the Cathedral's elaborate east window.

Busy as she had been in life she did not rest long.

Reports circulated of a woman in a white dress floating through the grounds. The first written account appeared in 1975 when a worker reported a veiled spirit walking down Church Street and entering via the west door.

Most often, Margaret is seen seated or kneeling in prayer, but she is also partial to playing the church's magnificent pipe organ.  To this day she still walks the path from their house to the Cathedral bringing her husband supper, as there have been numerous inexplicable incidents of people smelling tomato soup.

She has also been spotted standing at the pulpit as if delivering a sermon, a fitting spot to spend eternity for a bishop's wife.

Listen to the story on TikTok